Sometimes in football, everything just seems to be going right. The announcement of Brendan Rodgers as Celtic manager on 20th May 2016 was met with jubilation amongst the Celtic faithful, with almost 13,000 supporters welcoming Brendan into Paradise.

These days a league title is the minimum expectation at Celtic Park, just ask Ronny Deila, and whilst the excitement and anticipation ahead of a new season under a truly top class manager in Rodgers was clear for all to this time last year, I think it’s fair to say none of us quite expected it to reach these ecstatic heights:

Champions League qualification at the first time of asking (the first ever Celtic manager to achieve this).
43 Domestic Matches played. Undefeated. 39 wins and 4 draws.
Progressive, high-pressing, attacking football. 122 domestic goals scored.
Double secured. Potential Treble.
Winning 5-1 home and away vs The rangers (biggest every victory at Ibrox)
Brendan Rodgers 76.36% win rate in all competitions (highest winning percentage of any Celtic manager).
6 in a row.
Rodgers signing a new 4-year contract extension.
And last, but by no means least…

This is how it feels to be Celtic…

Following the shameful behaviour of a few morons across the city last week; attacking our captain, throwing objects at our players, and most disgusting of all, racially abusing Scott Sinclair, it was a wonderful sight to see the Celtic fans and Scotty in solidarity at the end of the St. Johnstone match yesterday, declaring that racism has no place in our game, in our society, and it won’t be accepted. 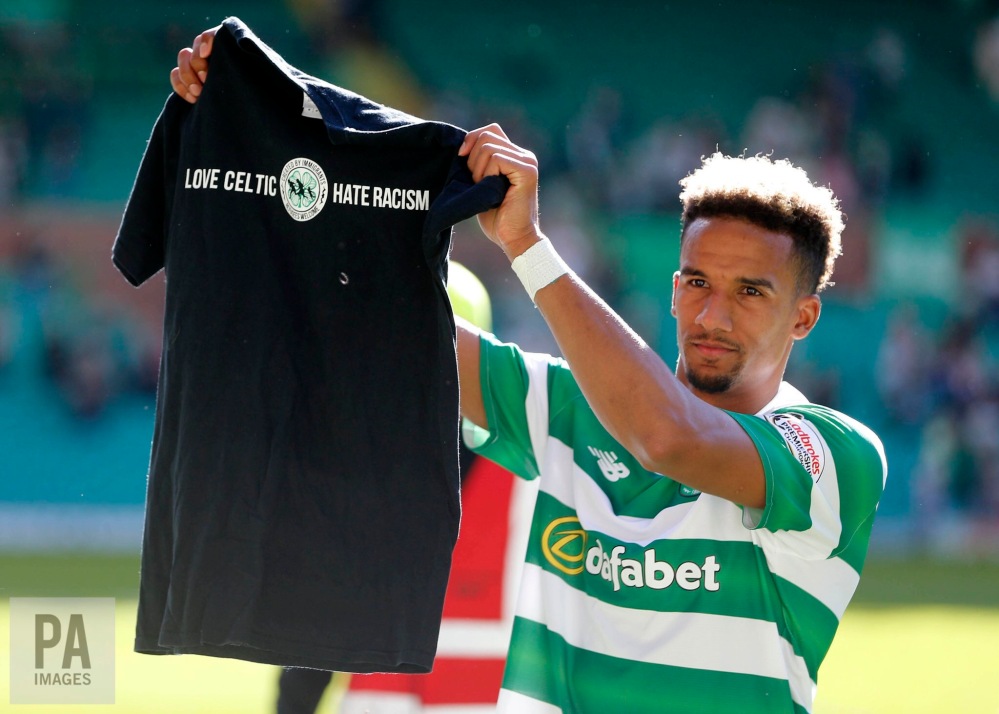 Where last season apathy appeared, this year it has been replaced by unity, hunger, and enthusiasm.

The squad, the manager, the fans, everyone at the club is together, on board following the same message in order to drive the club forward.

We have our limits, we all know that, but with a young and passionate squad being directed by a respected, and indeed gifted, manager our potential is there to reach a level we’ve not witnessed in years.

Champions again as you know…

As is always the way in the Scottish media our top performing players are continually linked with moves away from the club: Dembele, Sinclair, Tierney, Armstrong the most frequent to be at the moment. Of course just a few weeks ago it was our manager himself who we apparently wouldn’t be capable of holding onto. Then the 4-year contract extension came.

If big money comes calling for one or two of our stars it will of course be hard to resist, but currently it is clear that Celtic Park feels like home to this squad.

Brendan is in charge of all footballing matters, that much is clear, he has his own plans and ideas of how the club should function and where it can progress to, on and off the pitch. These are exciting times ahead.

A fantastic first half performance today saw Celtic race into another 3-0 lead at the break.

As expected St. Johnstone sat behind the ball from the off in attempt to frustrate Celtic, but whereas in previous seasons we may have struggled to penetrate a stubborn defence, this year our forward players look fitter and most importantly, confident on the ball. There is a swagger back in the Celtic attack, and the front four were blistering in the first half.

With back-to-back 4th placed finishes in the SPFL Premiership, St. Johnstone are by no means pushovers, especially on their own turf, but today they couldn’t live with the pace, skill, and movement of our play.

James Forrest continued his fine form and picked up the Man of the Match award (and is slowly but surely winning the support – myself included – back round); Sinclair added another goal to his impressive early season tally; but for me it was Tom Rogic who was the star of the show.

Physically strong in possession, tricky on the ball, and with the ability to carve the opposition defence open, Tom is beginning to ensure his name is one of the first on the team sheet. What impresses me most about Rogic is his anticipation to turn away from his man; countless times today Tom would receive the ball with his back to goal, and with a drop of the shoulder (sorry, I had to throw that in there) roll away from his marker. With his improved fitness now combining with his natural ability as a footballer, Rogic is beginning to dominate games in the final third, dictating the pace and picking off the runs of our wide men.

With Paddy Roberts and Moussa Dembele still to come into the the starting XI our attacking arsenal is certainly looking an exciting prospect.

A lapse in concentration late on saw another 2 goals conceded from a commanding position, but, with Brendan Rodgers having rung the changes in the second half, the rhythm of the side had no doubt been disrupted – plus Celtic were momentarily reduced to 10 men as St. Johnstone’s second goal was scored.

Brendan will be keen to ensure we improve our ability to see a game out, but with a mentality to dominate and attack teams at every opportunity we may have to expect the odd counter attacking goal conceded throughout the season.

The higher calibre signings, the increased confidence, and the feel good factor; we call that the Brendan effect.

Yesterday’s announcement that Brendan Rodgers will become the new manager of Celtic has been met with sheer delight amongst the Celtic support. The ex-Liverpool manager, renowned for his attacking brand of football, arrives at Paradise with an air of excitement and expectation.

Brendan Rodgers’, the 2014 LMA Manager of the Year, appointment is a statement from Celtic Football Club. The lack of European football in recent years; an apparent over-influential boardroom; and a (at times) mystifying transfer policy, has led to the most disenganged Celtic support over the last two years in my memory. The appointment of Celtic’s new boss was one the club had to get right.

When Dermot Desmond decides to flex his muscles at Celtic Park he usually gets what he wants; early rumours that Roy Keane was top of the list of potential candidates was greeted with sceptacism and frustration from the majority of Celtic supporters. This reaction will not have gone unnoticed with the powers that be at Celtic, and the decision was made to ensure that the outstanding candidate would be in the dugout come the start of the new season.

Brendan’s appointment has stolen the limelight in Scotland (is there a cup final on soon?), but also made headlines across Britain, not long since linked with the managers role at Chelsea, Rodgers is seen is seen as a real coup for Celtic. Brendan may feel his reputation is in need of some rebuilding following a difficult final spell at Liverpool, however, one unfortunate slip away from (probably) becoming champions of England , his ability and potential as a manager is there for all to see.

Famed for his intricate coaching and man management skills Brendan arrives with glowing references from some of the games biggest global stars; Luis Suarez crediting him for his current success at Barcelona.

A united and energised squad, playing football the Celtic way, with high-pressing, attacking football is something we all crave, and now there is a real sense of optimism that we have the man at the helm to produce this.

Nothing in life can guarentee success, but the importance of restoring an engaged and excited Celtic fanbase cannot be undermined, and with Rodgers’ arrival we have seen a buzz return to Paradise that could play a significant role in the coming months, none more so than the Champions League qualifiers.

I, for one, am delighted.

Follow Drop the Shoulder on WordPress.com
Join 176 other followers